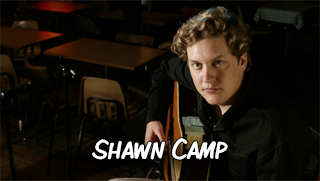 Some careers can be described with a couple of words, but Shawn Camp’s isn’t one of them. The Arkansas native has earned wide respect as the top-tier penman behind #1 Billboard hits for George Strait, Josh Turner and Brooks and Dunn. Camp frequently splits pages with legendary tunesmiths like Guy Clark and our beloved Jim Lauderdale. A fine performer in his own right and a true artist, Camp’s previous solo albums have consistently turned heads.